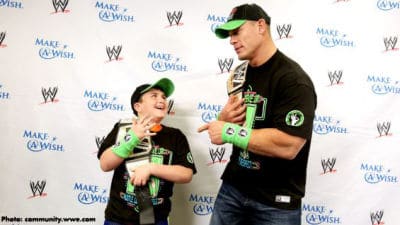 John Cena is best known for one thing: Throwing his fellow World Wrestling Entertainment competitors around a wrestling ring. Cena has been the face of WWE for almost 10 years and is a multiple-time world champion. But he has two pursuits outside of the ring that also consume a lot of time: his cars and helping Make-A-Wish.

Cena's car collection features a lot of American muscle cars. He regularly drives a 1971 AMC Hornet SC/360, reportedly due to the rarity of the vehicle – AMC went out of business in 1988. However, Cena is a collector of current muscle cars as well as the classics. Here's a list of what Cena has in his ample collection:

Cena was featured on the SyFy Network television show "Dream Machines," where a Corvette C7 was stripped down to the frame. Parker Brothers Concepts built him the Incenarator, a futuristic, custom-designed vehicle complete with a flamethrower, limited-edition 24-inch rims and a three-piece canopy that opens up for Cena to exit out of. The car was featured in the Gumball 3000 rally that went from Copenhagen to Monaco.

In his wrestling career, Cena takes a backseat to no one. It's no different than in his work for Make-A-Wish. Cena is the all-time record-holder for most wishes granted through Make-A-Wish - he grants wish No. 500 on Aug. 24, 2015. He was awarded the Chris Greicius Award in 2009 for his efforts on behalf of Wish Kids. The award is named for the child whose wish was the foundation Make-A-Wish was built upon.

WWE and WWE Superstars have been granting wishes with Make-A-Wish for more than 30 years and have donated a significant amount of funds to help cover costs associated with many of those wishes. Cena continues to be one of the most-frequently requested celebrity wishes. Make-A-Wish honored WWE Superstar John Cena and WWE for their contributions to wish kids by dedicating a WWE-themed conference room in the charity’s global headquarters in Phoenix.

"WWE wishes have been popular since early in the Foundation’s history and we are proud to count the WWE and its Superstars as longtime supporters,” said David Williams, President and Chief Executive Officer for Make-A-Wish, when the room was dedicated in 2012. “John Cena’s commitment to our mission and his connection with our wish kids make him one of our best wish ambassadors. We are grateful for everything John and WWE have done, and we look forward to them granting many more wishes in the future."

Use Your Car To Help Make-A-Wish

You don't have to be a celebrity to help Wish Kids have their wish granted. If you have an unwanted vehicle, you can make a vehicle donation to Wheels For Wishes benefiting Make-A-Wish. Make-A-Wish chapters around the country are dedicated to helping children with life-threating medical conditions. If you want to help their goal of granting wishes, please consider making a car donation to Wheels For Wishes, the car donation program benefiting Make-A-Wish. We offer you a great tax deduction, free towing and an easy way to support an important cause. To donate your car, boat, RV, motorcycle or other vehicle, please call 1-855-278-9474 or fill out our online car donation form.