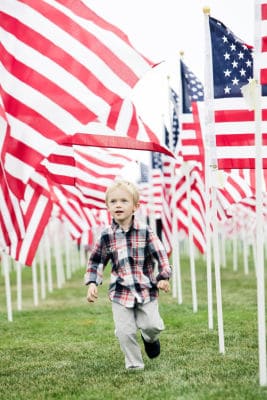 July 4, now referred to as Independence Day, has a long tradition of celebration in the United States. Since the Declaration of Independence was signed and approved in 1776, historical celebrations have occurred all over the country to honor the nation’s freedom.

The tradition of fireworks almost everyone has come to love started on July 4, 1777 in Philadelphia. Making the day even more historical, former presidents and declaration signees John Adams and Thomas Jefferson both died on July 4, 1826, a half century after the Declaration of Independence was approved. Finally, exactly 44 years later in 1870, Independence Day became an official holiday.

Now families across the country typically get together, barbeque and watch the fireworks. Celebrations all throughout the country are filled with rich heritage and tradition, so it’s fun to venture out of your neck of the woods and see some of the best destinations for Independence Day.

Go Where It All Started

It’s hard to compete with the city that birthed independence in America—Philadelphia. Plan a visit to old America by touring Independence Hall—where the declaration was signed. Then walk across the street and see the Liberty Bell. Finally, make your way to the fireworks at the Philadelphia Museum of Art where you will find the famous stairs featured in Rocky—the ultimate American dream movie. Don’t forget to try a Philly cheesesteak!

Be A Part Of New York

There is one Fourth of July tradition that might be hard for you to stomach, but that’s OK—these champions will stomach it for you. 2016 is the 100th anniversary of the Nathan’s Hot Dog Eating Contest in Coney Island, N.Y. Spend your lunch time watching the masters of lunch scarf down as many hot dogs as humanly possible. If you need to look away, you can make your way to the Statue of Liberty. Then journey to the west side of the Hudson River to watch the Macy’s fireworks show. The view of New York City is already spectacular, but when you add fireworks, it’s even more beautiful.

Visit The Home Of The Declaration

While Washington, D.C. might not be the real home of the Declaration of Independence, it is its resting place. Start your day visiting the National Archives where you can see the Declaration and meet the founding fathers—although they are just actors in costume. Spend the rest of your day at the National Mall browsing through all the monuments, museums and watching the parade and musical performances. You don’t have to travel anywhere from there to see the spectacular fireworks show, aligned with some of America’s most precious buildings and monuments.

The Best Town For Feeling Patriotic

You don’t have to go to one of the original colonies to get the American experience for your July 4 celebration. In fact, one of the most highly-acclaimed places to be for the holiday is Flagstaff, Arizona. Flagstaff brings the American spirit of the pioneer and a day full of celebratory events together to create an environment that simply has the patriot essence. Red, white and blue covers the town filled with flags, parades, music, art, and, of course, fireworks!

Some places in the U.S. simply stand out because of their spectacular fireworks. Minneapolis hosts the Red, White and Boom Festival on the riverfront. The two-day event features one of the largest fireworks shows in America. Boulder, Colo. features a unique show inside Colorado University’s stadium. Every seat is the best seat in the house for this up-close display of fireworks, but the best seat might be the one next to Ralphie, the live Buffalo mascot. If you can’t get enough fireworks, St. Louis certainly meets the demand. St. Louis has a huge fireworks show not one, not two, but three days in a row. So find a good angle of the Gateway Arch and the fireworks, and soak in the patriotic pyrotechnics.

Whether you are inspired by the founding fathers to live a simpler colonial lifestyle, or you just have an unwanted vehicle you are looking to get rid of, donating your car will impact much more than just your life and garage space. In fact, donating your car to Wheels For Wishes will help local children’s charities benefit the lives of kids in your area.

Wheels For Wishes also takes away the hassle, especially during a holiday season, of trying to sell your unwanted vehicle. Best of all, because Wheels For Wishes is a 501(c)(3) nonprofit organization, your donation is 100 percent tax deductible! To donate your car, visit the chapter locater and fill out an online car donation form, or call us at 1-855-278-9474. Celebrate your freedom this year by giving freedom to a local child!