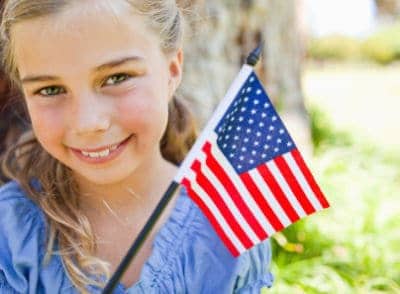 10 Fun Facts About Our Flag

Flag Day, celebrated on June 14, is the perfect time to get out your flags and show your American pride! You don’t have to wait until Independence Day to get started; National Flag Day is a great opportunity to display the American flag on your home. You will also see the flag proudly displayed on all government buildings during the week of June 14. You may even hear of a parade in your city or other events that will honor the American flag.

The American flag has played a big part in the lives of Americans. We have grown up admiring the flag and learning about the flag in school. We have seen it displayed on holidays such as Memorial Day and Independence Day. The flag is very important in American culture, but it’s easy to forget all of the interesting facts of how the American flag came to be.

It may have taken a while to officially declare June 14 as Flag Day, but now that it’s a reserved holiday, take your American flag out and wash it if you have to. Make sure you show your American pride on June 14!

Make A Difference In Your Community

In America, we have so many opportunities to give back to our communities and to make a difference in the individual lives of others. Like Flag Day or any holiday, we take the time to appreciate what we have. We make choices to reach out and help others. America is lucky to have an organization as wonderful as Make-A-Wish to help grant the wishes of kids with critical illnesses. Make-A-Wish also gives you plenty of opportunities to help, and that is where Wheels For Wishes comes in.

If you have a vehicle to donate to Wheels For Wishes, benefiting Make-A-Wish, give us a call today. Your used vehicle can help inspire a local child and make their dreams come true.

The American flag is a source of pride and inspiration for American citizens, especially today and on other patriotic holidays like the Fourth of July. It encourages us to play a part in our community and give back to those who need it. If you are able, all you need to do is donate an unwanted car, truck, SUV, RV, motorcycle, Jet Ski, trailer or boat and it will help a local child in your community live their dreams.

To donate a vehicle, please call us at call 1-855-278-9474 or fill out our easy online vehicle donation form. You will feel great about helping local kids with your donation!