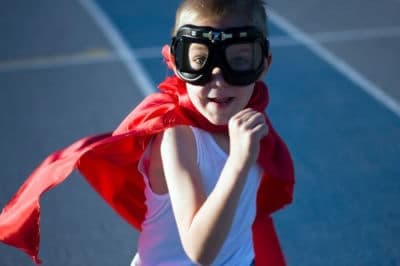 Start 2015 On A Positive Note With These Stories

The holidays may be behind us, but we wanted to share these uplifting stories from the holiday season to help start 2015 off with inspiration and positivity. Here at Wheels For Wishes we love sharing positive stories with our supporters and we love helping Make-A-Wish with our car donation program. If you would like to help create a positive story for a child in your community, consider donating a vehicle to benefit your local Make-A-Wish and help a wish come true for a child battling a critical illness. Just call 1-855-278-9474 or take a moment to fill out our donation form.

In the meantime we hope these stories will kick-start a positive and very happy new year for you!

Traveling around Christmas is a stressful ordeal for many, worrying about getting to the airport on time and cancelled flights. At Terminal 1 of Chicago O'Hare International Airport, though, travelers were greeted by cuddly golden retrievers. Half a dozen dogs were available Dec. 20-23, and plenty of travelers took a moment out of their chaotic trip to sit down and pet the dogs. Kids and adults all stopped to de-stress with the pet therapy. The dogs gave everyone a much-needed moment to stop and relax before walking away with a smile. See adorable pictures and the story here.

Boy Donates 79 Coats To A Homeless Shelter In Need

When Nate Dreyfus, a nine-year-old from Stillwater, Minn., witnessed a man get out of his car and give his coat to a homeless man he was inspired by the selflessness of the act. He decided he wanted to give coats to people who needed them as well. He did just that, and was able to collect and donate 79 coats to a local shelter called Project Home. On Dec. 2 he and his sister brought them in, along with a cash donation to cover some of the things the shelter needs but doesn’t receive donations for. His inspiring act of kindness will provide warmth to dozens of Minnesotans in need this winter! Read the whole story and see the video here.

Nine-year-old Reece Davis spent a lot of nights in Children's Mercy Hospital when he was battling cancer. Now that he is in remission, Reece decided he wanted to help out other children who had to spend Christmas at the hospital. With the help of friends and donations from community members, Reece brought nearly 90 toys to the hospital, which he placed under the tree for other children to have a fun holiday. He picked out things he would like as well as toys he thought other kids of all ages would enjoy. Reece's kindness brought joy to everyone involved! Read the story here.

At Heth-Washington Elementary in Indiana, the school principal Nissa Ellet had been noticing that many of her students wore tattered shoes. Ellet recalls repairing many pairs of shoes throughout the year so that kids could get through the day without them falling apart. She was aware that the school's poverty rate had risen quite a bit – to 75% -- in recent years, and she decided to help out by buying new shoes for everyone at her school. Her goal was to raise $6,000, but the community's support was so great that she raised $17,000 instead. In addition to new shoes for the whole school, she was able to buy hats, gloves, snow boots, scarves and a school hoodie for every student. At a special assembly, the students excitedly received their new items. Many of the kids said they couldn't wait to try out the boots and shoes. You can read the whole story here.

Growing up in Hawaii, Wish Kid Kenny always dreamed of playing in the snow. Recently, Make-A-Wish turned that into a reality when his wish was granted. After battling a critical illness, Kenny and his family were able to take a much-needed trip to Lake Tahoe where there was plenty of snow and fun to be had. Kenny learned how to ski and had a wonderful time relaxing with his family. The trip was a great time for the whole family, and his parents wrote to tell Make-A-Wish that the trip gave them all a drive to stay healthy as well as an unforgettable experience they will hold onto the rest of their lives.

Wishes like these truly are wonderful things! If you would like to be a part of this great cause, consider making a vehicle donation by giving us a call 1-855-278-9474 or filling out an easy donation form.