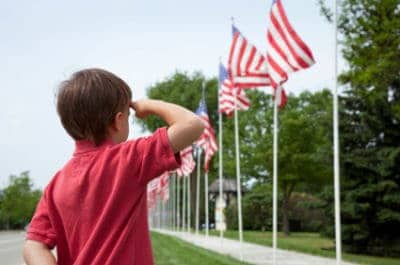 Honor A Veteran In Your Life This November

We celebrate Veterans Day on Nov. 11, but the sentiment of that day should be on the mind of all Americans throughout the year. There were more than 21.5 million veterans in the United States in 2011 – with that number steadily growing. Each day, members of the United States Armed Forces protect us both domestically and internationally, giving up simple commodities so we can live in relative peace.

Originally known as Armistice Day, commemorating the cease-fire reached during WWI between allied nations and Germany on the 11th day of the 11th month at the 11th hour, Veterans Day took on a new name following WWII and was dedicated to the veterans of all wars. As a federal holiday, Veterans Day offers many in the United States a day off from their regular work week.

Veterans Day Around The World

The United States isn’t the only country in the world that celebrates some kind of Veterans Day on or around Nov. 11. Canada, Britain, Australia and France also celebrate their veterans in one way or another in November. Canada and Britain refer to their holiday as Remembrance Day, and many of the commonwealth countries that were once colonized by Britain hold a moment of silence yearly at 11 a.m., Nov. 11. Remembrance Day is a day dedicated to honoring those members of the military who died in combat in their respective countries.

There are more countries throughout the world that celebrate a dedicated day to their military, specifically those who have served and died for their country. These celebrations take place at different times throughout the year and center around dates with cultural significance to each country individually.

The red ‘remembrance’ poppy is often referred to as the flower of Veterans Day – a result of the John McCrae poem “In Flanders Fields.” In the poem, McCrae makes reference to poppies growing on the graves of fallen soldiers; as a result, red poppies have become synonymous with fallen soldiers and are used to decorate the graves of veterans across the country. Here is the poem in its entirety:

In Flanders fields the poppies blow
Between the crosses, row on row,
That mark our place; and in the sky
The larks, still bravely singing, fly
Scarce heard amid the guns below.

We are the Dead. Short days ago
We lived, felt dawn, saw sunset glow,
Loved and were loved, and now we lie
In Flanders fields.

Take up our quarrel with the foe:
To you from failing hands we throw
The torch; be yours to hold it high.
If ye break faith with us who die
We shall not sleep, though poppies grow
In Flanders fields.

An official wreath laying ceremony is held annually as part of the Veterans Day celebration in the United States. The wreath commemorates soldiers who remain buried in unmarked graves around the world and is laid in a ceremony at the Tomb of the Unknown Soldier in Washington D.C.

Veterans Day should not be confused with a similar holiday which takes place the fourth Monday in May, Memorial Day. The distinction between the two holidays is that Memorial Day is a day of honor for those who died while serving their country. Veterans Day is a day to thank veterans of all wars for their service.

Honor Veterans With A Donation

Service members give every day to make our lives easier – in some instances paying the ultimate price. Veterans Day is the one day of the year dedicated to the celebration of this nation’s veterans. Many will attend parades and dinners across the United States with friends and family celebrating the heroes in their lives. You can be a hero to a child with a critical illness by donating to Make-A-Wish through Wheels For Wishes.

Wheels For Wishes is a 501(c)(3) non-profit organization that takes your car, boat, SUV, motorcycle or ATV and turns it into a wish through Make-A-Wish. Net proceeds from your donation benefit Make-A-Wish who grant wishes to children with critical illnesses. Wheels For Wishes will arrange to pick up your vehicle at no cost to you and each donation is 100 percent tax deductible. To donate a vehicle to Wheels For Wishes, please call 1-855-278-9474 or fill out our easy online vehicle donation form.

Remember the veterans in your life this Nov. 11, and honor the Wish Kids by contributing to Make-A-Wish through Wheels For Wishes. Share your thank you to all veterans across the United States, or a special veteran in your life, by commenting on our Facebook and Twitter pages.