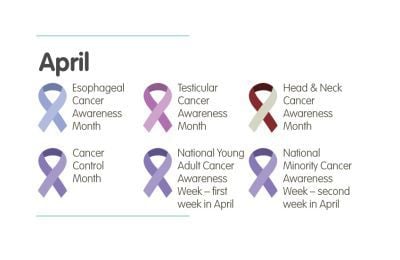 April is the awareness month for four types of cancer: head and neck, esophageal, and testicular. It’s an important time to discuss these different diseases because some can be prevented through self-care, while others need to be discovered during examination by a doctor. Many of these cancers are related because of the three ways that the disease spreads throughout the body:

Cancer awareness months are not meant to cause worry or hypochondria. The purpose of this month is to spread awareness about these diseases, many of which are preventable through lifestyle choices and are also highly treatable.

Cancers known collectively as head and neck usually begin in the cells that line the moist and mucosal areas inside of the head and neck known as squamous cells. It can also begin the salivary glands, but that’s fairly unusual. Head and Neck cancers are distinct categories from cancers of the brain, eye, esophagus, and the thyroid gland, along with any scalp, skin, muscles, and bones of the head or neck. These are not usually called Head and Neck Cancers. We can further categorize these cancers based on where they begin.

Head and Neck Cancers include:

Symptoms of cancers of the head and neck may include:

While these symptoms may be caused by other conditions, it’s important to discuss any of these occurrences with a doctor or dentist.

Head and neck cancers make up nearly 3 percent of all cancers diagnosed in America. They are twice as common in men, and are often diagnosed in people over the age of fifty. You can protect yourself by quitting smoking, reducing or eliminating alcohol consumption, avoiding the HPV virus through the vaccine or always using a condom, eating plenty of fruits and vegetables, reducing sun expose and using lip balm with sun block.

Formed in the muscular tube connecting your throat to your stomach, more than 18,000 Americans will develop esophageal cancer and over 15,000 people will die from it. Rates of diagnosis have been slowly rising over the past twenty to thirty years. It is treatable, but not curable.

Prevention tips involve avoiding alcohol and tobacco, eating fruits and vegetables, maintaining a healthy weight, and checking with a doctor for Barrett’s esophagus or other pre-cancerous symptoms.

Testicular cancer forms in the tissues of one or both testicles. Usually it begins in the germ cells, which are the cells that create sperm.

Signs and Symptoms of Testicular Cancer include:

It is the most common form of cancer in men between the ages of fifteen and thirty-four. While it is most common in younger or middle-aged men, older men can get it, too. White men are four times more likely to get testicular cancer, but the reason for the increased risk is yet to be explained. The American Cancer Society estimates that over 8,800 men in the United States will be diagnosed with testicular cancer this year, and nearly 400 of these men will die from the disease. It’s an incredibly common form of cancer: Almost one in every 270 men develops it, and rates in the United States are slowly increasing.

Although the number of new cases of testicular cancer has doubled in the last 40 years, deaths caused by the disease have actually decreased due to better treatment. It can usually be cured, even in the later stages of its development.  While there is no standard or routine test to check for testicular cancer, it usually can be detected by the person themselves or by a doctor during a routine physical. This is why it’s important to maintain a yearly physical by a doctor with whom you have established a trusting medical relationship, and include testicular examination during this appointment. You can also perform a testicular self-exam every month to check for unusual symptoms or irregularities.

There are many risk factors involved in this month of cancer awareness, but the preventative measures are easily achievable, along with yearly examinations by a doctor. Don’t be afraid of checking with a medical professional if something feels incorrect or strange. You know your own body better than anyone else. Stay aware of the early stages cancer symptoms and be honest if something isn’t quite right. Your doctor will be able to know if your worries are founded and if a screening would be helpful. Stay nutritionally healthy, stay active, and continue to stay aware of cancer symptoms and updated research.

Donate Your Car, Help Kids Who May Have Cancer

A major way for you to help out cancer survivors and fighters in your community is to donate your car to Wheels for Wishes. We handle the expenses of towing, and we sell your car for you for charity. To make a car donation, simply call 1-855-278-9474 or make your donation online. Make April a month of awareness, courage, and generosity.