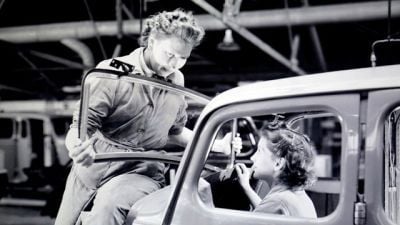 Since March is Women's History Month, we thought it would be the perfect time to highlight how influential women have changed the car industry throughout history. When it comes to the history of cars, people tend to think of Henry Ford, Karl Benz, Walter P. Chrysler, Horace Dodge, or other men whose names are behind the most recognizable car brands on the market today.

However, it's often overlooked that many of the car features and we use and enjoy today were in fact invented by women. In addition to inventions, there are countless other ways women have influenced the car industry.

Here are 9 ways women have shaped the car industry we know today.

Next time you crank the heat in your car, remember to thank Margaret Wilcox. Margaret was a mechanical engineer who invented the first car heater in 1893. The design used an opening from the engine that released hot air into the cab of a vehicle. It wasn't perfect, and it isn't the same design that we use today. However, she came up with the basic system on which modern car heaters are based.

After taking a trip to New York City and witnessing trolley drivers stopping to get out and clear snow or rain from the windows, Mary Anderson knew there had to be a better way. Her design used a manual lever that operated a wiper from inside the car.

Florence Lawrence is best known as "the first movie star." You probably didn't know that she also created the technology for the first turn signals in vehicles. Her design was for a mechanical signaling arm that indicated the direction you were turning and was operated with a button inside the vehicle. She also made a stop sign that would activate when the brakes were pressed. Sadly, she never got a patent for her design and the idea was quickly snatched up by others in the industry, leaving her without any credit or compensation. Interestingly enough, Florence's mother was also an inventor. She patented the first electric windshield wipers in 1917, but sadly did not receive much recognition, as the idea was copied by others.

If you've ever plugged an address into your smart phone or connected to your Wi-Fi enabled car, you can thank Hedy Lamar for inventing the technology behind it. Yes, the same Hedy Lamar who starred in films like Algiers and Samson and Delilah designed the wireless transmission technology that made GPS and Wi-Fi possible.

Thanks to scientist and inventor Katharine Blodgett, windshield glass doesn't have a glare, making vehicles much safer. After earning a Ph.D in Physics at Cambridge, Blodgett became the first woman hired by General Electric. While there, she invented a way to make glass surfaces non-reflective. Her technology was used for camera lenses, movie projectors, submarine periscopes, eyeglasses, computer screens and, of course, windshields.

Not only did Bertha Benz take the first long-distance road trip in a car, she also invented brake pads. If the name Benz sounds familiar, it's because Bertha's husband Karl Benz invented the first patented automobile, which later led to the creation of the Mercedes automobile and the Mercedes-Benz brand name. Bertha helped promote the car, or "motorwagen" as it was called then, by undertaking a 66-mile journey with her sons to her mother's house. Along the trip, she realized the need for brake pads to help the brakes operate to their full potential.

The automobile industry may be seen as a "man's world," given that 95 percent of the National Automobile Dealers Association members are men. However, women purchase 52 percent of cars sold and influence 85 percent of all car buying decisions. According to Maddy Dychtwald, author of Influence: How Women’s Economic Power Will Transform Our World for the Better, 74 percent of women still feel like their automobile needs are misunderstood by marketers. That's a pretty important statistic, considering women are also the fastest growing segment of buyers for both new and used cars.

Most of the time, when women have a hand in designing cars it has to do with the interior features. It's not often that women design the exterior of a vehicle, let alone a supercar. Michelle Christensen is the first woman to lead a supercar exterior design team. The Acura NSX has been in the works for years, but was released as part of Acura's 2017 lineup.

In 2014, Mary Barra became the CEO of General Motors, making her the first woman to ever lead a major auto company. She took the job amid GM's ignition switch scandal and pulled the company into a strong comeback. She's now looking to GM's future, which will include rolling out more electric cars and breaking into the autonomous vehicle market, in addition to the company's regular cars and trucks.

These nine women – and many more not listed here – have made a difference and influenced the auto industry in countless ways. If you'd like to make a difference with your car too, it's as easy as calling Wheels For Wishes! Our car donation program accepts all types of cars, boats, motorcycles and RVs regardless of their age or condition. Better yet, your donation is tax deductible and you receive free towing from anywhere.

Donate your car today by calling Wheels For Wishes at 1-855-278-9474 or filling out an online car donation form.