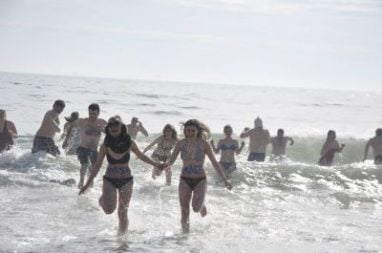 Kevin McCarthy and Pete Meyers decided it would be fun to jump into the Atlantic Ocean before the Super Bowl in 1998. However, seeing as they lived in New York and not Florida, it was not the pleasant experience that most people look for when they go to the beach. But, not only did the duo enjoy it, they started to build a following.

Mike Bradley asked to join in prior to the 1999 game. They readily agreed, and Mike brought along his brother, P.J. Bradley, to join in the swim. More than just a quick dip in the Atlantic, Mike Bradley, and his wife, Patti, were looking for a memorial for their son, Paulie. P.J. had asked Kevin and Pete if the annual Polar Bear Swim could be a fundraiser for Make-A-Wish Metro New York and Western New York, and the founding duo enthusiastically agreed.

On Feb. 7, prior to Super Bowl XL, the Long Beach Polar Bears Super Bowl Splash will again take place where Riverside Boulevard meets the Atlantic Ocean in Long Beach, N.Y. Since the event became a fundraiser for Make-A-Wish Metro New York and Western New York, nearly $5 million has been raised. Last year’s event brought more than 10,000 people to the beach and raised $528,000 for children with critical illnesses.

Registration Available Prior To The Plunge

Registration starts at 12:30 p.m. with the jump at 1:30. There is no charge to take part, but participants are encouraged to raise much needed funds for Make-A-Wish Metro New York and Western New York. You can register online, and if you can’t make it, you can sponsor a jumper, or make a general donation to the event.

Make-A-Wish Metro New York and Western New York touches the life of a child diagnosed with a critical illness every 10 hours, which makes events like the Long Beach Polar Bears Super Bowl Splash so important.

Making a car donation is free. Plus, your donation is 100 percent tax deductible! Just give us a call at 1-877-431-9474 or use our easy online donation form. We pick up vehicles from all five boroughs – Bronx, Brooklyn, Queens, Manhattan and Staten Island – so you don’t have to do any extra work to get rid of your unwanted car.

We will pick up your vehicle at no cost to you, then provide you with your maximum tax deduction. We can take your vehicle whether it is running or not. Save some time and stress by donating your car today.